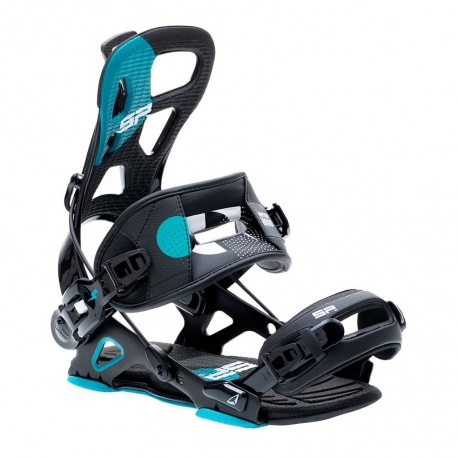 The SP Brotherhood snowboard binding is a high quality SP man snowboard binding. They are a polyvalent snow bindings, but made for those riders that love freestyle. Take them out for some jibbing in park or street with your squad. The flex is forgiving and frisky yet reliable when the chips are down. The sturdy aluminium base and lightweight construction round up one of most sought-after snowboard park bindings.

We are talking obut the most complete and comfortable snowboard bindings on market. They are semi automàtic snowboard bindings, with the auto release & memory System. Which you will not have to remove and tighten the straps. This bindings have a back in closing system, fast and better than regular system. This system works without ratchets, so you won't have any problems with them either.

They are very well fixed with the boot as they have pointed fixation. For those who have the big foot has a few hooks in the tip. For the freestyle they have the disc covered with E.V.A. (padding) so that they don't come loose, don't make ice claps and amortize the receptions.

NOTE: You can mount this snowboard bindings on 4x4 System with 4 screews as usual. But they can also mount on Burton snowboards with 2 screew channels.

Here's a video to see how the release & memory system works:

We accept the following forms of payment